15 - 58 pts / 8 - 61 pts in semi 1
The band Pollapönk won the Icelandic final Söngvakeppnin 2014 with the song Enga Fordóma (No prejudice). The song is written by bandmembers Heiðar Örn Kristjánsson en Haraldur Freyr Gíslason.
You can listen to the original song here at RÚV.
The song was performed in English in Copenhagen as No Prejudice.
Lyrics for the English version are written by John Grant, American singer-songwriter currently living in Reykjavik. John Grant also has a beard.
You can watch the official video at HandsUps Youtube.

Pre-school teachers Heiðar Örn Kristjánsson and Haraldur Freyr Gíslasson were members of Botnleðja who entered the Icelandic selection in 2003 with the song Euróvísa which ended 2nd behind Birgitta Haukdals Segðu Mér Allt.
Record store employees Arnar Þór Gíslason and Guðni Finnsson were members of rock band Dr. Spock who entered the Icelandic Söngvkeppni in 2008 with Hvar Ertu Nú? They finished third.
Gíslasson also played in a zillion other bands including Stolía, Írafár and Ensími (with Finnson).
The Pollapönkers were joined joined by former bookseller now MP Óttarr Proppé in purple (of HAM and Dr. Spock) and playwright Snæbjörn Ragnarsson in orange (of Skálmöld).


Predjudice is not a word, so after initially releasing No Predjudice via iTunes the new digital release image reads No Prejuduce.

Here's a video of John Grant teaching the English version to the Pollapönkers. (Thanks to HandsUp Music)
In the Söngvakeppnin super final a part of the song was performed in English.
You can listen to the English version here at a page from Pollapönks sponsors some may actually have some prejudice against.

EP and album
A digital EP release of No Prejudice includes five versions of the song.
The Eurovision version, Club mix, Lo Fi version, Karaoke version and Icelandic version.
The Lo-Fi version of the Icelandic version is also released. It's on the new Best Of collection Bebebe-Besta Pollapönkið. The album (digital release) also includes the original Icelanic version and Club Mix in English.
On the Icelandic digital issue (at Tónlist) the Club mix is named Enga Fordóma (Eurostuð) but it's in English.
The remix of No Prejudice is made by Örlygur Smári (Oggi), writer of several Icelandic entries ('00, '08, '10 and '13). Check out the Euro Club mix here (youtube).

Note: Amazon offers CD versions of a five track single and the BeBeBe-Besta album. These are not regular CDs but CD-r's made by request. You just might as well do that yourself of course. 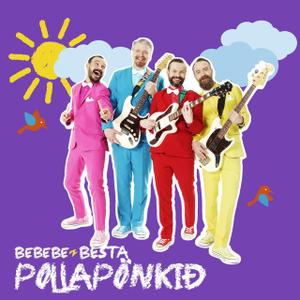 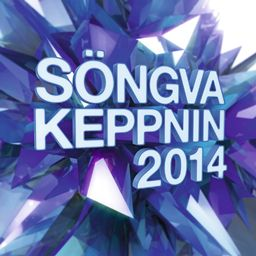 You can listen to all songs at RÚV's Söngvakeppnin pages

The Technicolor Tracksuits
If you want to do some more shopping, Pollapönks trademark tracksuits are also available for your kids in sizes 98 to 116 (Icelandic sizes of course)
Check 'em out here at Hagkaup. Don't know if the must have item for the 2014 fashion season will also become available in adult sizes.

More Iceland
Iceland have had an impressive run of six entries making it to the final but only one song was able to follow up with a good result: Is It True by Yohanna ended 2nd behind Norways Fairytale in 2009 equalling the placing for Selma Björnsdottirs All Out Of Luck in 1999.
Eyþór Ingi ended 17th in the final in Malmö. Greta Salomé and Jónsi only made it to #20 (2012). The friends of the late Sjónni Brink also ended 20th in the final and Hera Björk made it to #19.

Links and sources
Pollapönk FB
RÚV Söngvakeppnin pages
Thanks to Jean-François and to HandsUp music
Posted by Eurocovers at 9:37 PM